Wow… Mom really hasn’t been on this site since my first day of Kindergarten???? What the heck has she been doing? Okay, I’ll tell you. She’s been helping me learn to read. She’s been helping me learn to play hockey. She’s been cutting my pears and cooking me pizza and taking me for ice cream. Daddy’s been doing all kinds of crazy stuff too! He taught me how to “deek” in hockey. He’s been bringing me to Ballet where I twirl and jump and point my toes. He’s let me beat him in air hockey at least 100 times. And our new puppy, Z? She’s amazing. And she’s already been with us for 6 months. Wait, what? She hasn’t told you about Z? She’ll write more later this week. I’ll make her double promise.

And here are some recent shots in case you forgot who I was: 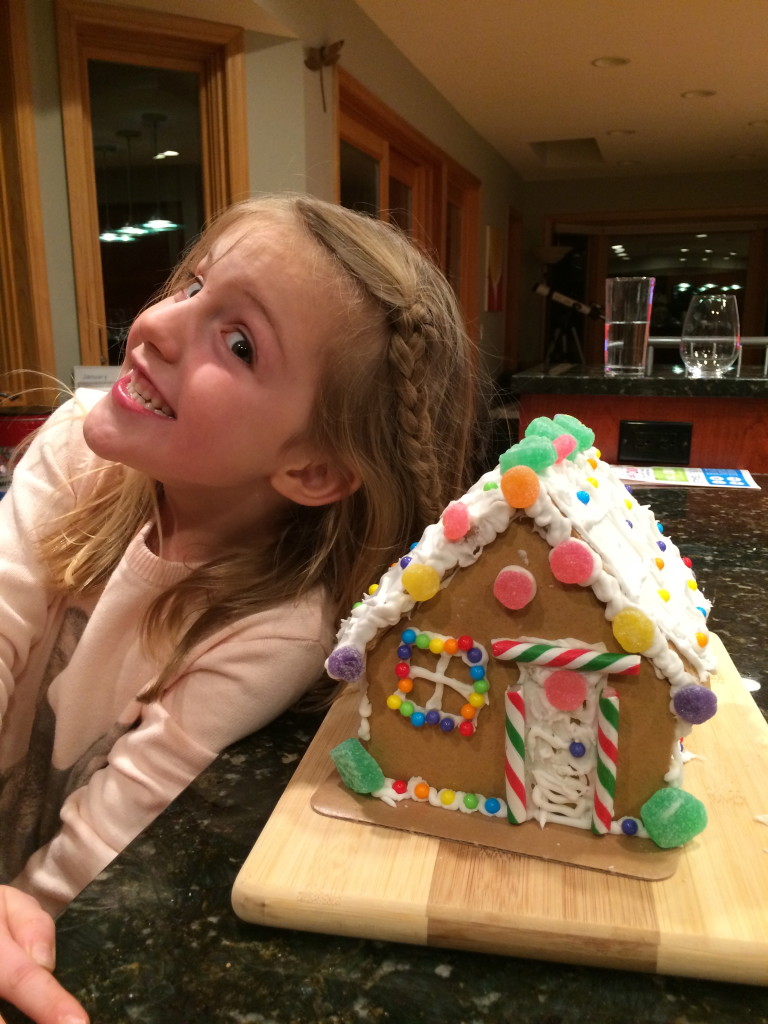 My amazing gingerbread house that had Mom swearing like a sailor. 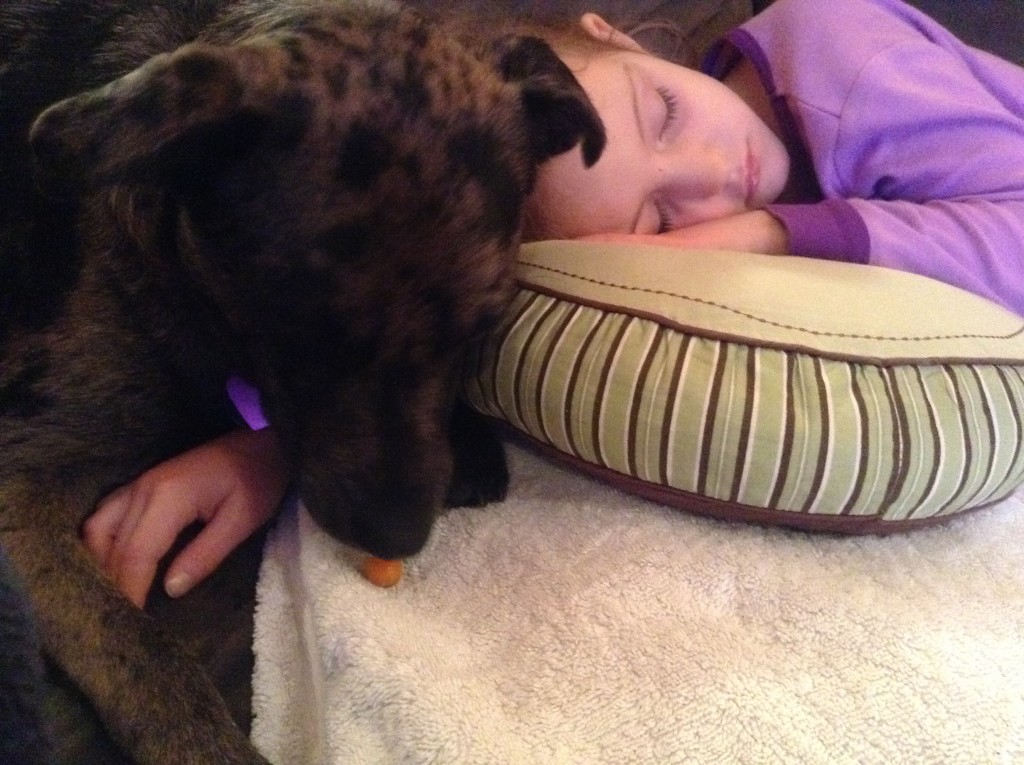 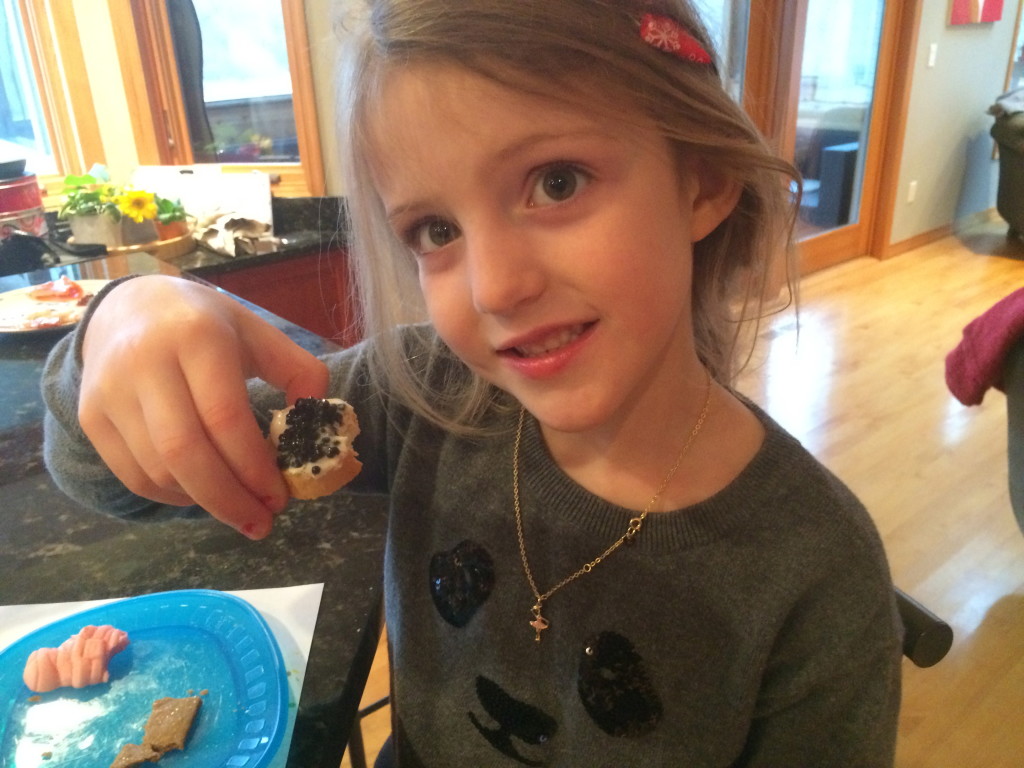 Dad introduced me to caviar. Now I request it. 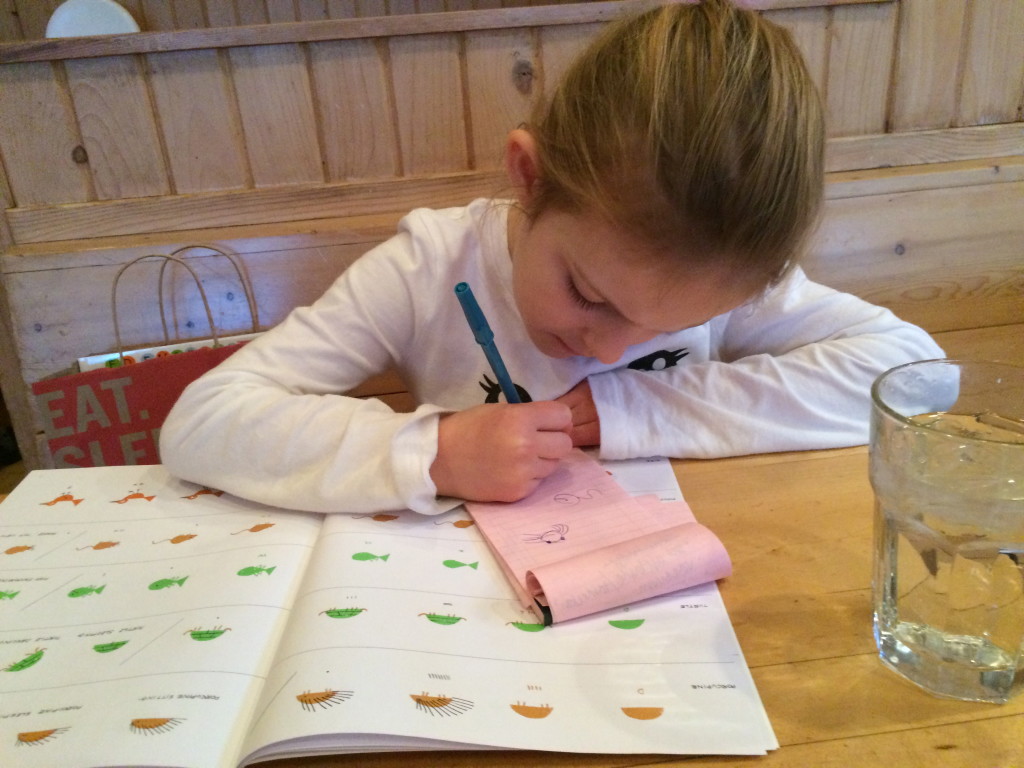 Mom got me this awesome drawing book. I’m an artist! 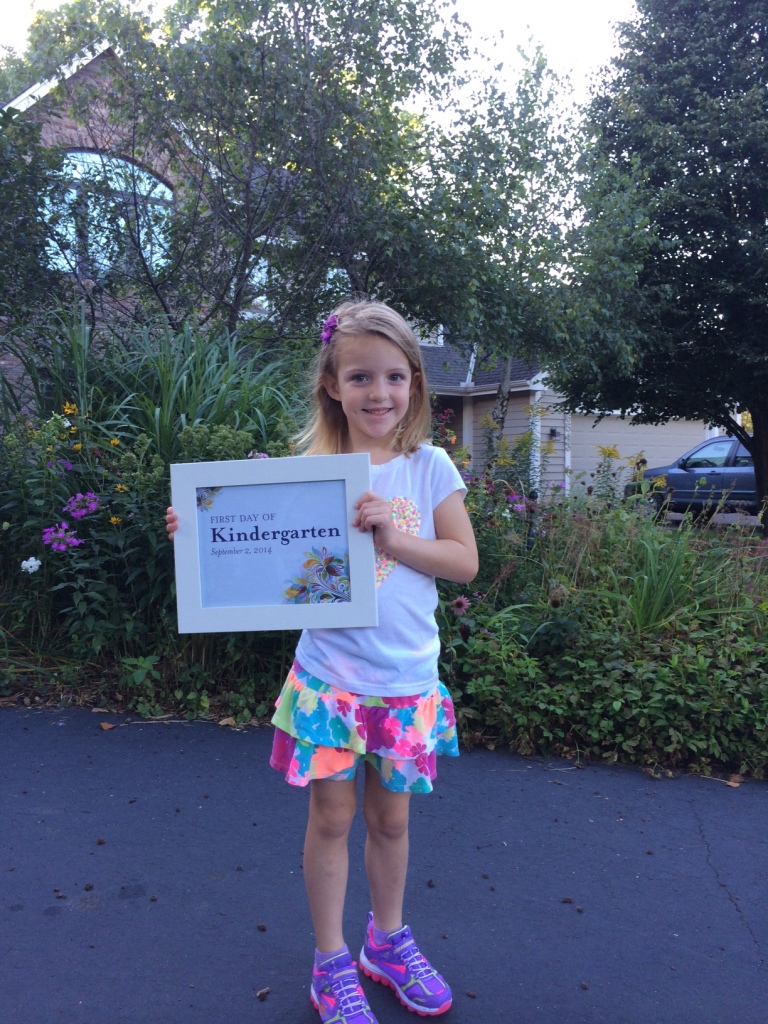 Well, Summer is over and Mom has failed to keep you updated on my doings. No worries. I’ll tell you all about Kindergarten.

I get to ride the bus in the morning with my friends, even though I don’t know their names. But I sit with the same girl in the second seat most days. Mom still brings me to the bus stop so she knows these things already. Then I spend the day with Srta. C in her class learning all kinds of stuff that I don’t tell Mom and Dad. Recess and lunchtime are my favorite. My friends A and A and I play and then go through the hot lunch line where I like to take extra vegetables. I have to pay extra but it doesn’t bother me.  Or my Dad.

After school I either take the bus home (Yay!), do the after school program (Yay!) or go to swimming lessons (Yay!). It’s been over a week and I like it. I really really like it. 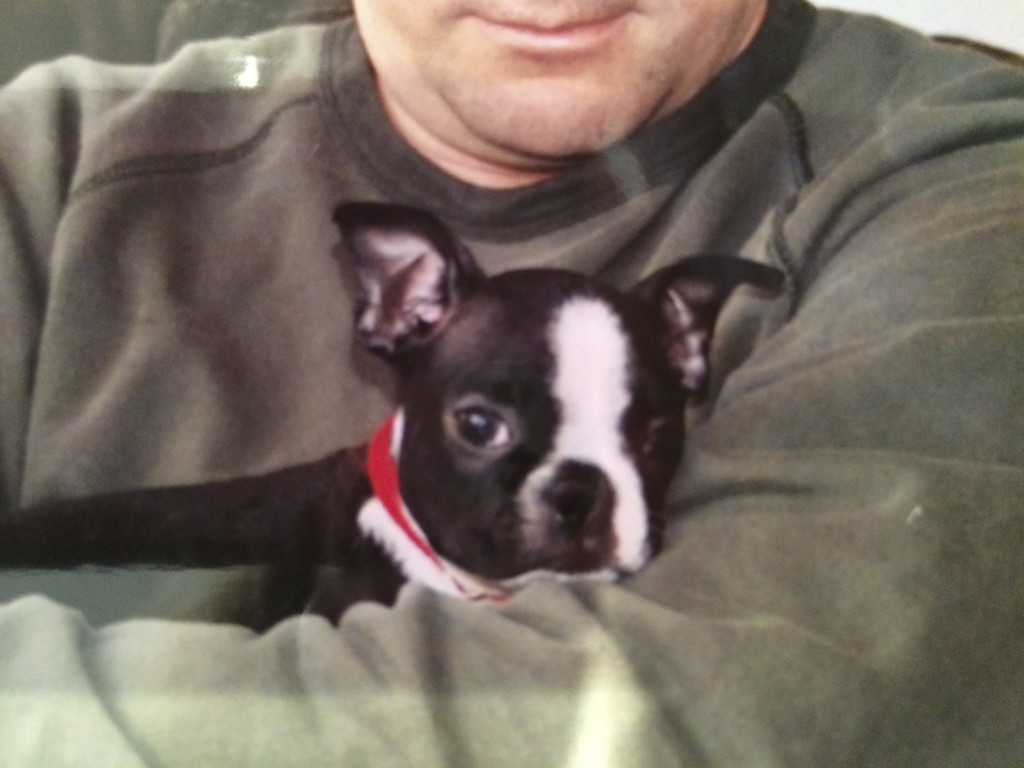 It’s Mom here. Not Nibbler. She just couldn’t bring herself to share this news with you. But Bug is gone. Most of you know that. Most of you know that after eleven and a half years we had to say good bye. Most of you probably know that Tuna is also gone. She barely made an appearance here, but back in March she got really sick, really fast and we had to let her go. Same with Bug. We think he had  a broken heart along with his broken back.

And it breaks my heart to write this, even though it’s been six weeks since we last saw him. Both pups have crossed the rainbow bridge and I just know they’re chasing each other and Bug is probably jumping on Luna’s head.
Bogey arrived on February 17, 2003. He was twelve weeks old and weighed just 3.5 pounds. We picked him up at the airport where he was coming from Kansas via Texas. Of course, he missed his connection and was over an hour late. When we got him into the skyway, we pulled him out of his kennel and I placed him inside my blue north face jacket. He was terrified, but settled down quickly when he realized how cold it was outside and how warm it was in the jacket. Once at home we set him on the hard wood floor and all four legs quickly slid out, until he was on his belly. He was so little he could only but his front paws on the bottom step. We carried him, we cuddled him, we loved him, for over eleven years.
Not a day went by that I didn’t kiss his little “kiss spot”, the white spot on his head. His kindness will never be forgotten. And at night, when I lie in bed, I can still imagine that he’s curled up against me beneath the covers.
Marc held him as we said goodbye. I held his paw. Nibbler watched from the window. I think losing a second dog so quickly was hardest on her. It was peaceful. It was beautiful. It was so fast. But finally, his poor little body was calm for the first time in days. His panting subsided. His spasming back relaxed. His eyes closed. His breathing slowed. And then his heart stopped.
We wept. The vet took him away. But we kept the memories. The love he had for us. The love we had for him.
Rest in peace, little man. We love you.

(and for the record, this is the only time I fell)

Oh, my, so much has happened in the last two months! But here are just a few fun shots from the weekend. I won’t let Mom get so far behind next time… Seriously!! 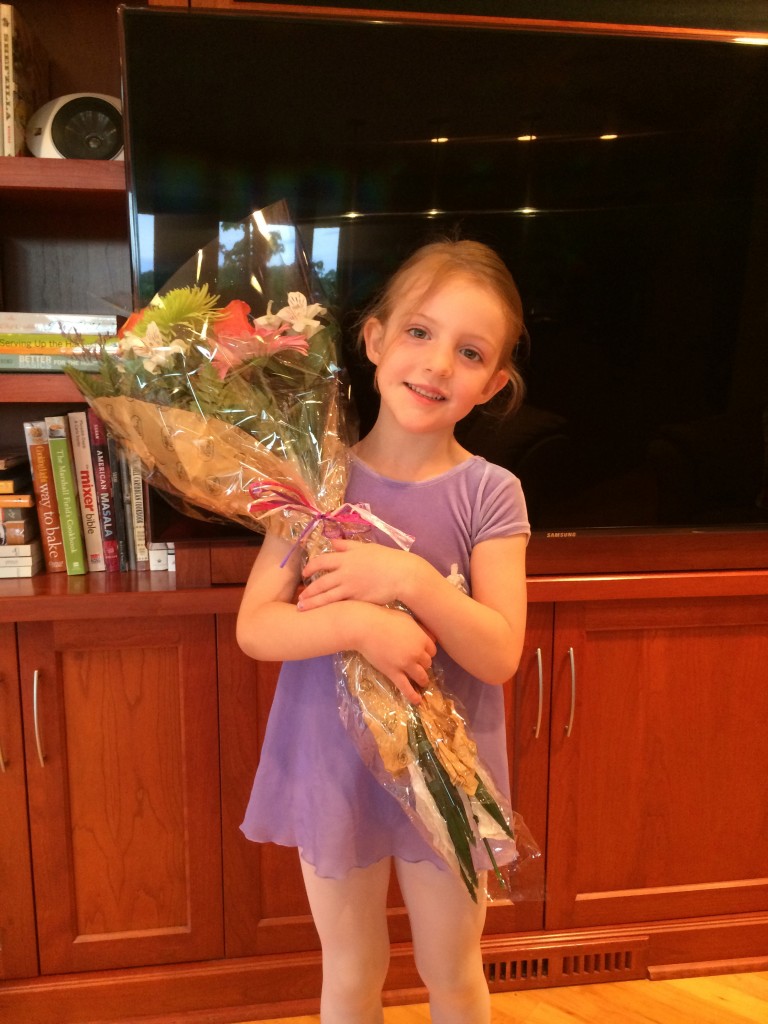 Flowers for the dancer even after the show was cancelled. 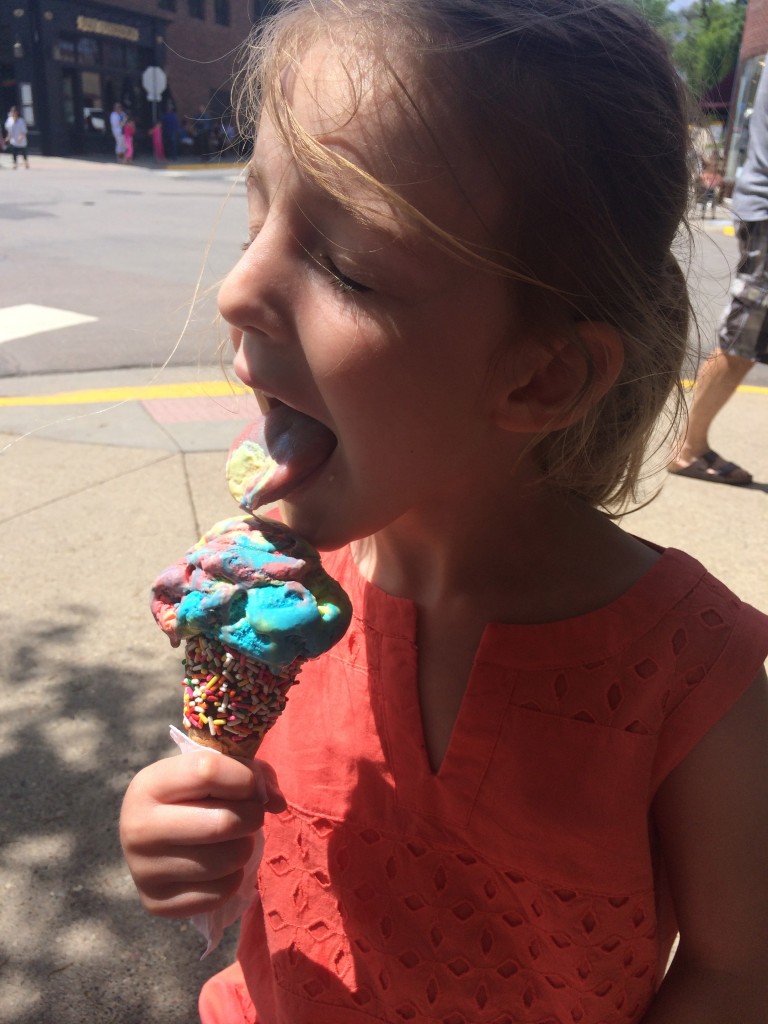 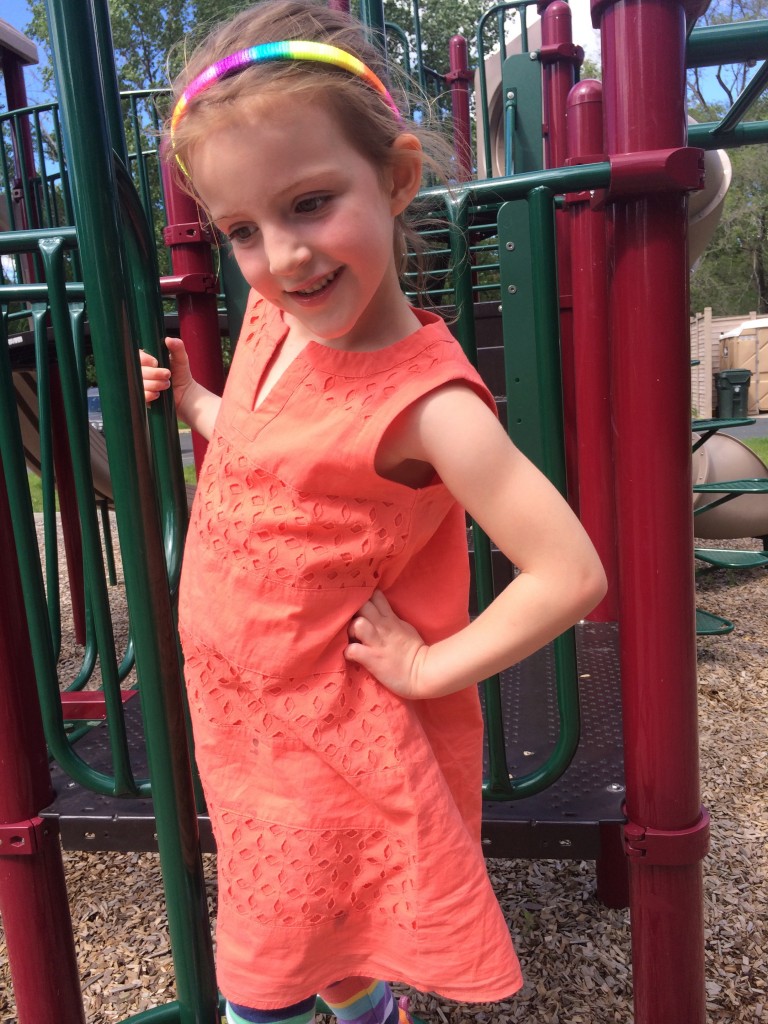 Posing at the playground. 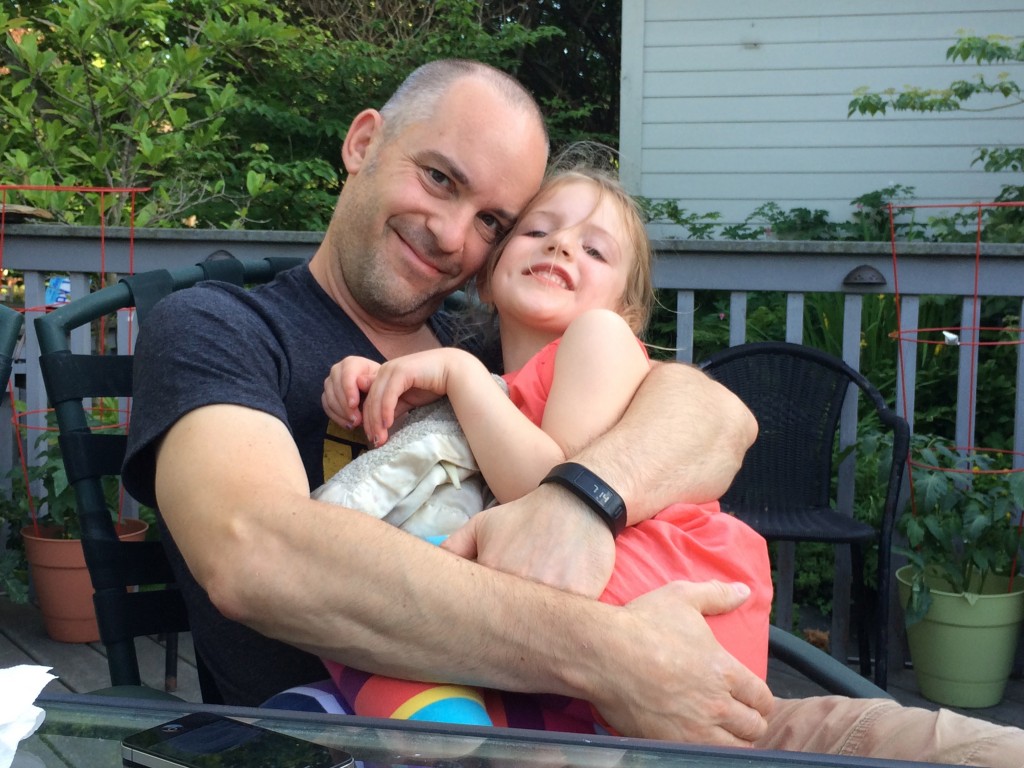 Cuddling with Daddy on Father’s Day. 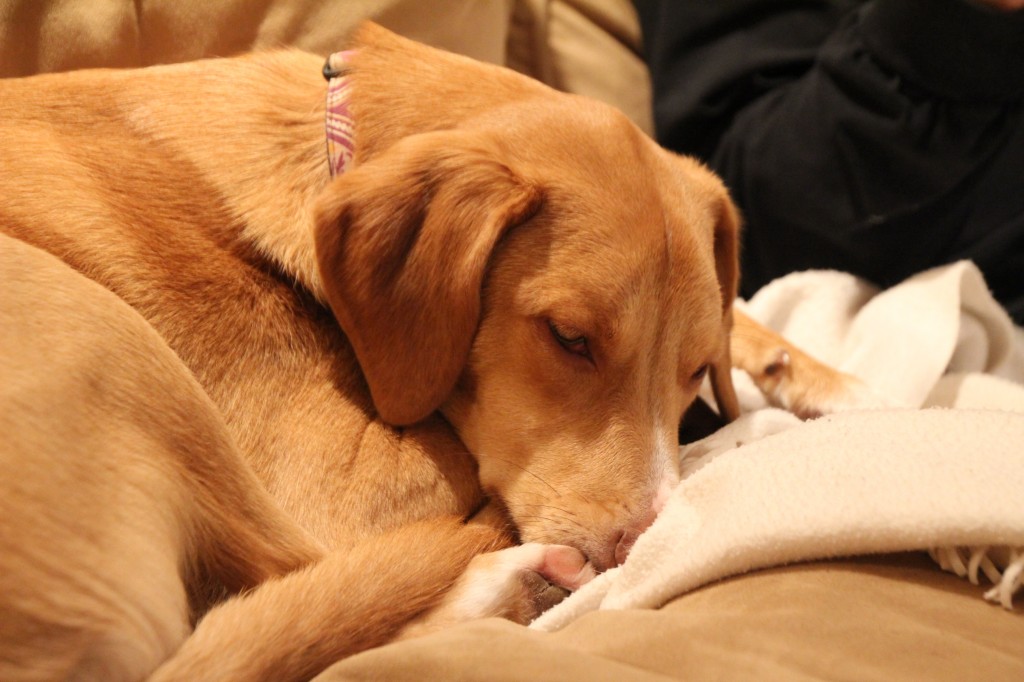 Our sweet little Luna lost her battle with Pneumonia last week. Really, it was a battle we all felt, but it was her poor body that couldn’t handle it. The Doctors did what they could. And were honest when the could do no more. She was just over 15 months old. She lived with us for 13. She was sweet, talkative, loving, energetic and so incredibly smart. We were looking forward to many many more years of her love. We were looking forward to long hikes and short runs. We were looking forward to cuddles and vacuuming up her thick fur. It’s never easy to lose a furry family member, but more difficult when they are young. Luna was really young, just a pup. She will be missed. She will be remembered. We will always love her. Always. 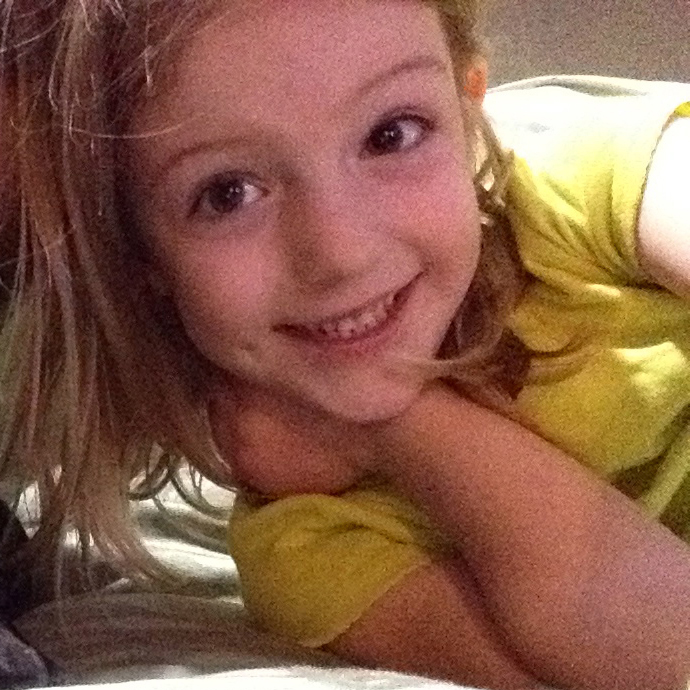 (Oh, and Mom says she’s sorry that she’s so far behind posting here. Geez, Mom, what have you been doing?)

I knew it was somewhere… 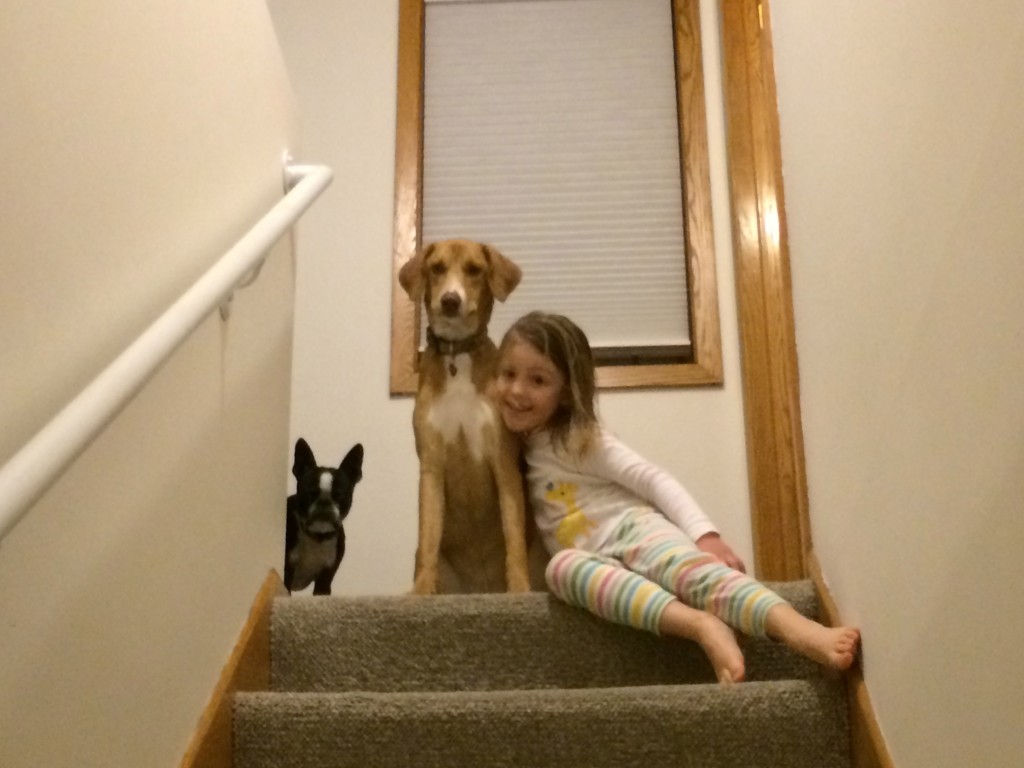 Cuddled with my Pups before bedtime. 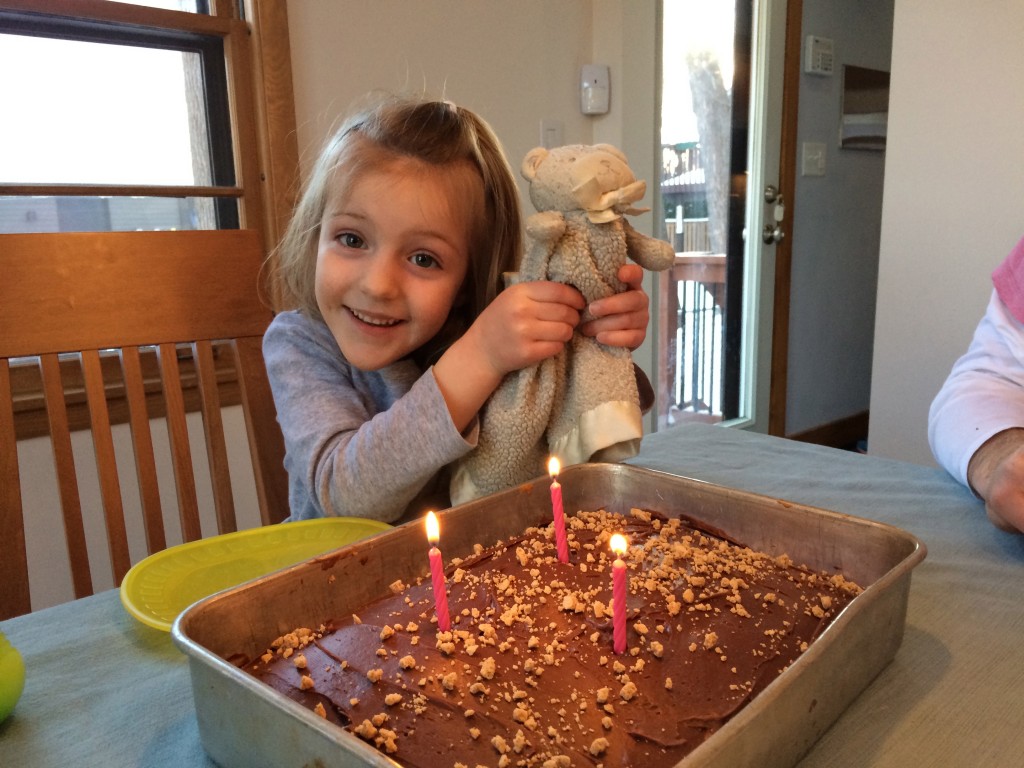 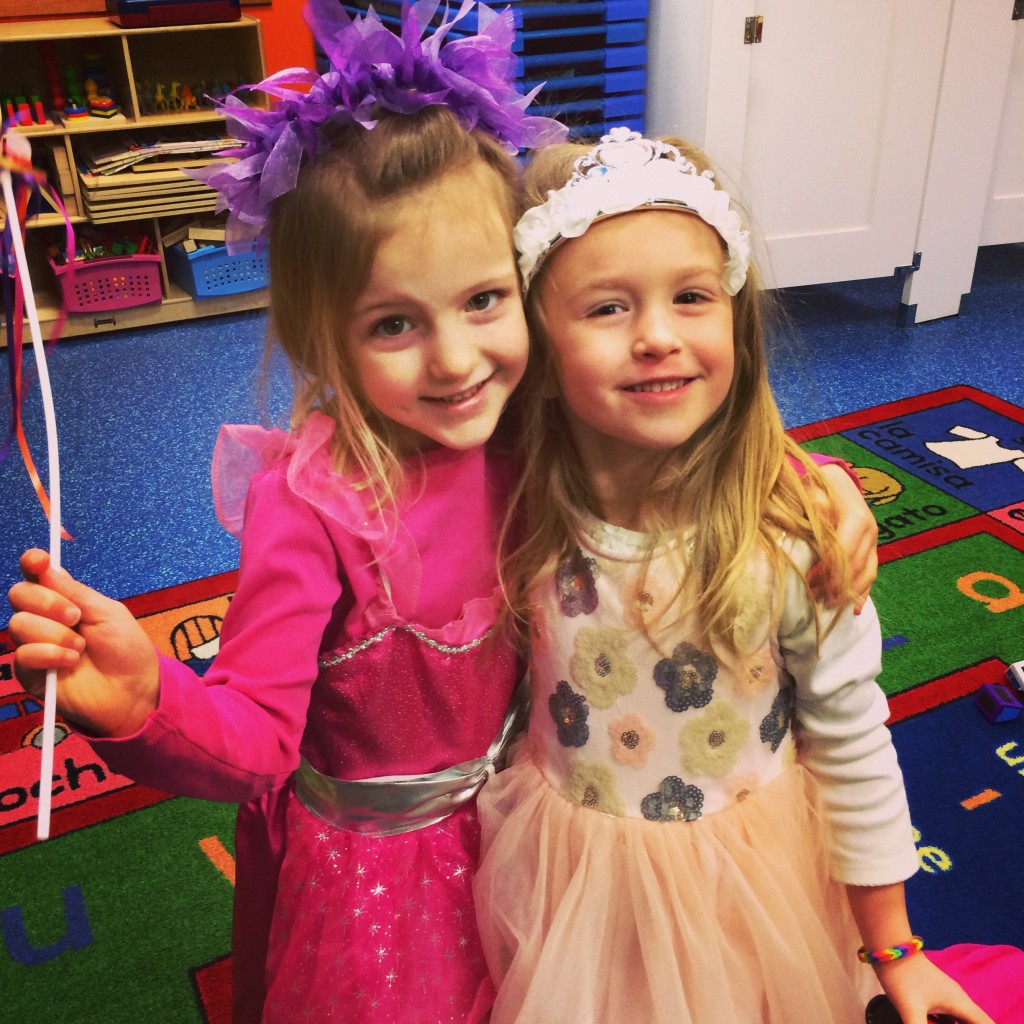 Royalty Day at school with my good friend, Ellie. 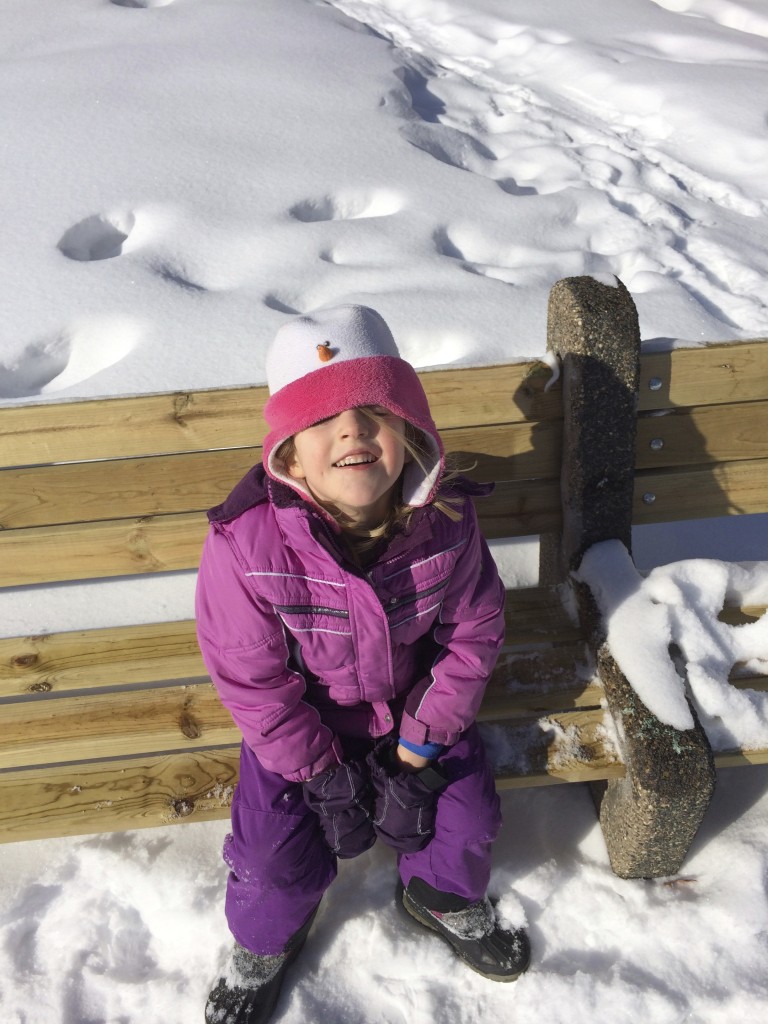 Where did January go? I guess I’ve been hibernating. Actually, I have been. We’ve barely been outside at school since November. But this weekend we went for a walk (without the dogs) and Daddy and I looked for tracks. We found squirrel tracks and even an egg track! 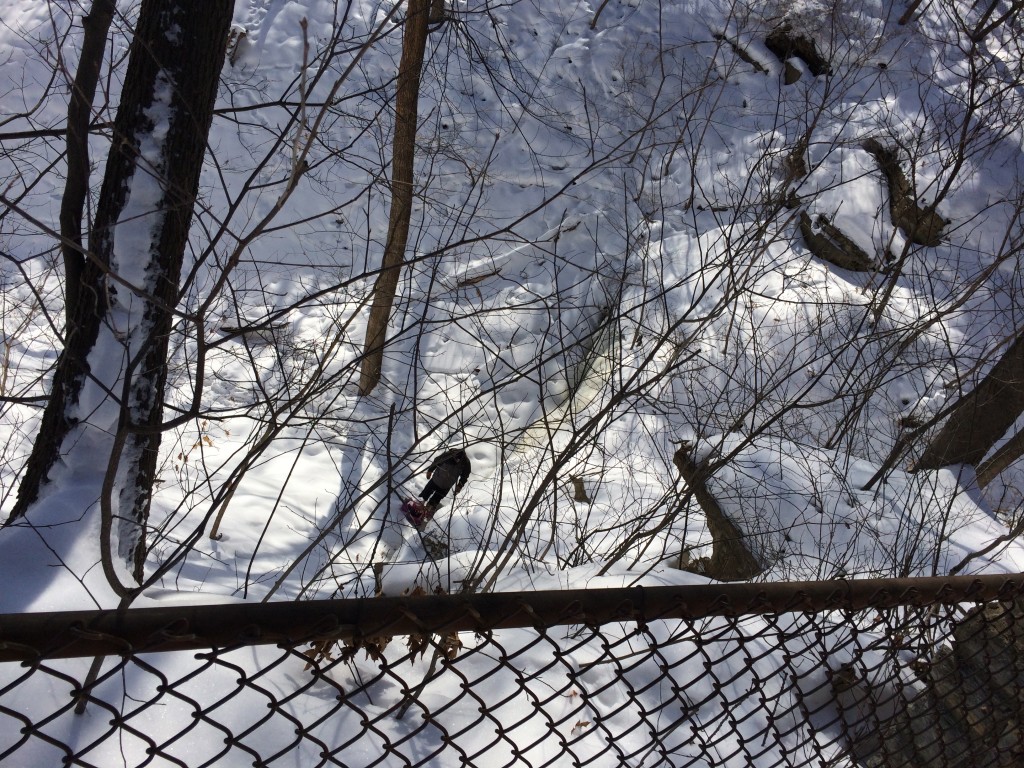 (see us down there? I like adventuring as much as Daddy!)